I guess I'm not the only one into pork products these days, as today's New York Times notes in a story about a mighty meaty creation called "The Bacon Explosion," whose recipe can be found here: http://www.nytimes.com/2009/01/28/dining/281brex.html?_r=1&scp=1&sq=Bacon%20Explosion&st=cse

I haven't tried the recipe, which frankly looks a little too greasy, even for moi, but if 16,000 people on the web have checked it out, it's certainly worth a try. The fact is, I think the more bad economic news we hear, the more we turn to salty comfort foods.
Believe it or not, I actually ate cereal for breakfast yesterday, something I have not been interested in since maybe October. I'm pretty sure it's because we've had so much sun, which, as the John Denver song so aptly puts it, almost always makes me high.

I threw a handful of dried cherries on top of a bowl o' Go Lean Crunch -- fiberama (8g), with way too much sugar (13g), 9g of protein -- and organic lowfat milk. Was I sated? No. Did I feel hungry in two hours? Yes. So it was a ham, provolone and salami sandwich on 7-grain bread for lunch, and that got me through the rest of the day until dinner, which I made in my cast-iron pan: sauteed chicken, tomato-basil quinoa with salsa on the side, buttered green beans (I'm into frozen organic right now because the ones in the market look gray and are probably grown in toxic chemicals in some faraway land). Much better.

This morning I was back on the bacon-and-egg-for-breakfast bandwagon. I am not so sure it was any less healthful than the cereal. I use a small amount of butter in the pan, fry two eggs, one for me and one for Joe. He and I have devised a good way to make bacon in the microwave, sans much grease, and it comes out very crispy and flat: Layer two paper towels (white is best) on a dinner plate. Place the bacon on top without the pieces touching. Cover with another two pieces of paper towel and layer more on top. Eight pieces are about all this method can handle. Microwave on high, a minute for each piece of bacon, turning the bacon/toweling over halfway through. Remove from microwave with hotpads. Peel the bacon off the toweling. Deelish.

It is another gorgeous day of sun, so I'm heading out to the gym.
Posted by PattyEats at 9:23 AM 1 comment:

So just as I am preparing my ridiculously calorie-laden morning meal, I glance at my Tufts Health & Nutrition Letter, whose back page headline shouts: "High Egg Consumption Associated with Diabetes Risk." Okay. Now I feel worse than I did when I got up and read the thermometer outside my window. Zero.

I couldn't sleep all night because I chowed down on too much spaghetti and (ouch) Italian sausage, so here I am making more cholesterol bombs for my bloodstream. I did use high-fiber pasta at least, but man oh man, I've gotta stop eating pork sausage with God knows what inside.

During my all-nighter, I watched Cox Newspapers' Bob Deans interview David Sanger, the New York Times chief Washington correspondent, on C-SPAN's Book TV Show, After Words. I'm fascinated and freaked out by Sanger's new book, The Inheritance: The World Obama Confronts and the Challenges to American Power. Sanger points out that America has been in an economic time warp thanks to our involvement in Iraq and Afghanistan, just as China has become a superpower supastar. Who's our daddy? China. No kidding--what with every man, woman and child from now until eternity owing China our inheritances and our grandchildren's, too. That interview runs again on Feb. 1 at 11 a.m. so check it out. Or if you can navigate the strange website and download, do it to it. http://www.booktv.org/program.aspx?ProgramId=10189&SectionName=


I just read that Iceland's government collapsed today, a huge glacial ice shelf in the Arctic is about to collapse, and because I have not had much sleep, I am teetering on the edge of collapse as well.

So, excusez-moi mes amis, au revoir--I'm heading back down to the kitchen to forage in my freezer for a little more comfort food. Most probably it will be more pork.
Posted by PattyEats at 1:53 PM No comments: 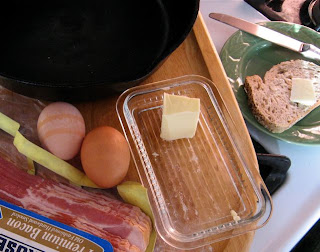 I awake with a gnawing feeling, an insistent primal urge that won't be quieted. My toes slip from satiny sheets into chilly air, onto the cold carpet, into a pair of thick socks, down the hall to the bathroom, the toothbrush, then a flight of stairs, and I'm at the stove, yearning for butter. Yes, the luxurious splendor of butter searing the bottom of a pepper-specked organic egg in my perfectly seasoned No. 10-1/2 cast iron pan, butter melting on a thick slice of ciabatta toast, butter pooling sweetly into its lacy holes. Oh, and why not a few toothsome pieces of applewood bacon or a savory sausage patty from the farm down the road or maybe a Smoky Link?

I am now ready to face another day.

Here in farm country, where I am not a farmer but I have been eating like one, this great big breakfast has been my pattern since mid-November, when the Lake Effect snow started falling and never stopped. What, 100 inches so far? I'm eating for 10 people, eating to feel warm, to feel comfort, to feel safe, to feel right.

Yet, believe me, I know better. I can almost hear my arteries clogging from all that sat fat. It's just that this particular winter is a relentless, suffocating blanket that has turned my eaves into icicles and ice dams, roads into skating rinks, meaningful travel into a dream. I don't even want to venture outside.

Staring out from my dining room table at the hilly, frosted tundra, I'm witnessing a black squirrel dragging an entire block of suet from its hanger to the side of the deck, and a chorus line of chickadees, nuthatches, juncos, finches, pine siskins, woodpeckers, mourning doves, in that order, pecking at thistle and sunflower seeds, taking needed sustenance, bearing up in the 2-degree day, yet rejoicing at the rarity of this sunny day. And out beyond the little lake I live on, behind a thin wall of sleet, there's a rainbow. A sleet-bow.

For that, I can rejoice. Here at the end of January, even though the Weather Channel has shown the identical seven-day forecast graphics of snow, week after tedious week, day after day, for two solid months, I have to believe that's a sign that spring just might come early this year.

And that this strange breakfast-eating disorder will cease before my arteries actually do snap, crackle and (gulp) pop.

Posted by PattyEats at 1:42 PM No comments: